When i was introduced to Final cut  pro in london during my masters in film and video productions i had no idea where its gona lead to.i was working on final cut pro for video editing and for sound mixing i was introduced to soundtrack pro on mac by my lecturer.i was told that this is the software which we can use for sound mixing on video’s.i was already good on final cut pro so it did’not take me long to get hang of soundtrack pro.final cut pro looks very impressive application on screen and it is indeed impressive.its a hardcore professional tool to edit video’s.its everything you need to make a professional video though there are other tools also which are available to download for free from the internet and which works on windows but final cut pro is right up there with industry standards.

Final cut pro only works on apple.there is no final cut pro version which works on windows and i don’t think there is going to be.why would final cut pro be available for windows.i guess windows and apple are two of the biggest rivals in the market.so why would apple make final cut pro available to windows ? and the question is right and answer is very simple.any fool can answer this question so i will not answer it.if you wana work on final cut pro you will have to buy mac system first and its not available cheaply in the market.i don’t have mac with me yet but i will buy it shortly.to buy apple you have to loosen up your pockets for quite a bit if you wana buy apple with handy configuration.well first when you will edit the video you have to render it high defination.when for this rendering your apple should be strong.its there in the market for you to purchase but be ready to spend quite a lot if not much out of your pocket.but i never had to buy one.first reason being my friend had an apple and second is that my college had lots of licensed mac system available to work on.so there was no dearth of apple.
Once you have apple with final cut pro installed you can do non linear video editing.its your creative strength that what you can do with this application.its not about the application but about what you can deliver with this application.it applies to every software program which is available in the market.with application like final cut pro available at your disposal video editing has become kitchen tool.anyone can go and buy an apple laptop or i mac with final cut studio and can start video editing.even opening production houses.you can work with a production company or work as a freelancer. 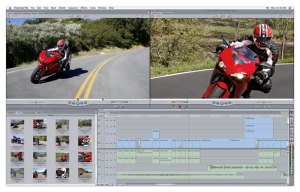 When i first saw final cut pro i was like oh my god what is this ? i was just completely scared.i thought how i am gona work on this tool ? i had doubts on my ability.but i was wrong.since it only looked complicated but it was’nt.again it depends how you take it.i took it with confidence and started working on it hoping that i will master it.after couple months of training it was walk in the park for me.final cut pro is a universe in itself the more you explore it the better you can get out of it.so never limit your self with this application.do what ever you feel like doing with it.i had great time with final cut pro.i really wana have an apple with final cut studio for myself.its not out of my reach but i am not  looking to invest money on it at the moment since i got plenty of video editing tools which works on windows similarly.
When i got trained on final cut pro it was time for me to  get familiar with Soundtrack pro and i believe it changed my life forever.introduction to soundtrack pro was a beginning of electronic music making.well i got my hands on new beat transmission in my young days,an application to make electronic music mixes.but introduction to soundtrack pro was indeed a turning point for me.i took soundtrack pro at supreme level in music mixing.my sound designing on films has always been out matched.first i used sound track pro for sound designing.later i also explored it to make music mixes.time came when i never got tired of soundtrack pro working on it from day till evening. 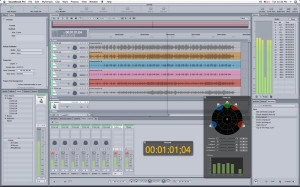 I made quite a few sound mixes with sound track pro which got applauded whoever has listen to.most of the people take soundtrack pro as only tool for sound mixing but its not.there is so much you can do out of the box with this tool.its not only about soundtrack pro but it applies to each and every stage of life.why follow the rules ,who do what is said.lets do something different,lets think out of the box and create something new ,something different.i got the result.i got different and completely new sounds because i allowed myself to break the rules and let myself play with it.the more i played the better i become.now i have all different tools which are like a walk in the park for me to make electronic mixes but i still play all those tools to create something new.always in the hunt to make a difference and to create something which is out of the box.an idea can change your life.it changed my life for good.what i learnt from it i am still carrying forward.every day you learn something ,i am doing the same.