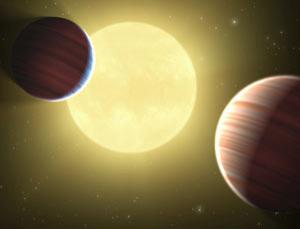 Strange things happens in this universe.the deeper you go in it ,more dark it becomes.take this two planets are found sharing the same orbit by kepler telescope.unlike anything like this seen before has now emerged again from the deep space.they don’t collide to each other since the other is about 60 degrees above the another.so the chances are they will never collide to each other.these planets are the part of the planetary system which is known as KOI-730.they circle their sun like parent star just our sun for 9.8 days with an exactly same orbital distance.

This discovery put a question mark on how moon was formed.Accourding to Richard Gott and Edward Belbruno of princeton university our moon was formed 50 million years after the birth of our solar system with the collision of mars like body and earth.This discovery suggest that two planets can’t collide with each other because they maintain the same orbital distance which prevents the collision.so if mars like planet and earth were on the same orbit they might not have collided after all as it has been thought so far.

But experts don’t deny that the collision is still possible.but these two planets will not collide any sooner.atleast for 2.22 million years.

Today is india vs england which has just started.england is a strong team but india is way stronger than england.i have been waiting for this match for so long.so time to enjoy.i am betting on india.its my home.but funny things happen in cricket.thats the beauty of this game.you can’t predict the winner till the last bowl is bowled.this is the game to watch.

An idea can change your life.i have heard this million times before.but how many times have we seen people using it to their benefit ? well we have an example or say successful examples of people who have used it and now they are one in a millions.take mark zuckerberg of facebook or shaun parker of napster.they are the creators of their respective ideas.an idea came into their mind and they worked on it.what then was only an idea changed the life of millions around the globe.now the question is we have billions of people around us who have different ways of thinking,visualizing,interpreting,socializing and blah blah blah.why it is that only few of those can come up with path breaking ideas ? imagine the world with a million path breaking and extraordinary ideas out of billion people.if we use all those ideas for the benefit of human kind ,what this world would be like is anybody’s guess.well my guess is that this world is not going be world any more it will become an ocean of ideas.a tsunami of ideas which will change the world we look at now.a different world but same people.think you got any idea today ? pen it down on paper ,see if can works and change your life and lives of people around you.think how it can different from the rest.think,think,think,well sounds like an easy task but thats what we lack the most the power of thinking.lets use it and lets create an idea.because we all together can create a tsunami of ideas