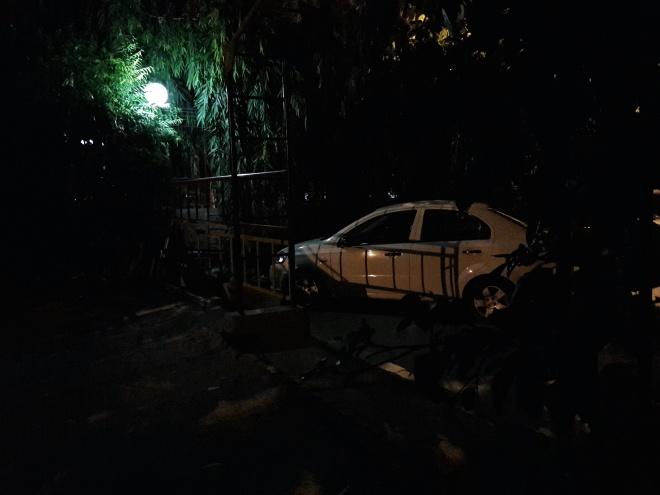 Few days ago me and my friend were coming to home after work .  we left office at 1 am and that day I had driven to work in my own car instead of boarding office cab , coz it was weekend so I decided to bring my own car and my friend who happens to be a female and my co worker left work late at night. on the way we bought snacks and beer . late at night we were hoping that we will not cross the line with law and will drive home safely and slowly. as it was a long route and on usual days it would take an hour to reach home . but that day we had different plan . we decided to drive slowly and to make a stop at one place where we can talk and gossip for long hours and then drive home.

As planned we drove slowly and stopped at one place , we had our snacks and we chit chatted . during this time ‘mags’ my friend’s name , saw a car parked right next to us .

She said she has seen this car before , I asked her where , she replied that this car is been following us ever since they left office. I said no , but she suggested me to go and check this car , lets go and have a word with the owner. I said alright. I was curious to know what was going on in here.

I walked up to the car leaving mags behind . as I approached the car I noticed its window were down and there was no driver. and when I looked inside I saw an ignition key , It appeared driver had left in a hurry, I decided to return and spoke to mags about this . she said its fine and then we decided to leave . as prepared to leave we noticed that our car was not in sight. I was puzzled to not to see my car. we looked around but we found it no where .

This is when mags told me to go and check the car we just noticed which belonged to someone but not us. for some stupid reason out of no where we decided to drive in abandoned car. we drove all the way and it looked very familiar , the car which we drove looked like we have been in it before.

I left mags at her home and drove to my home. we slept half of the day and woke up next afternoon like nothing happened.

I decided to went down to take a look at the car we drove last night.

It was my car.