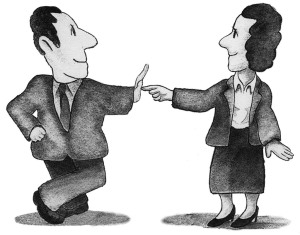 Few days ago , i was going back to my home along with my friend . we had finished our russian language classes at 8:30 pm  and were walking along the road talking on number of topics. we had a cup of tea and sipped all the way and enjoying the generous weather which was for some reason was little too generous that night. we were in CP , indian manhattan . it was late at night and roads had started to deserted. as we reached metro station we saw a woman in conversation with an auto driver. we did not pay any attention to it because it was not our business and it was a common sight. as we stepped on to the stairs of metro station , woman came to me and asked for a change , she was carring 500 indian rupee and had no change to give it to auto driver. she was a young woman in t shirt and jeans with a bag on her back , it appeared that she was coming from some classes. she looked like college goer. she asked if i have money to give it to auto driver because auto driver had no change and she had no change either. she also said that auto driver had charged too much money which he should not. its a common case with auto drivers in delhi so i was not surprised ed. i asked my friend for a change as i too was not carrying any change. unfortunately that day neither of us was carrying any change , we never had to because we had metro card with money in it so we never had to worry about any paper money.

Me and my friend we looked at each other , did not know how to  help helpless young woman , in general people leave if they are unable to help someone , and in this case it was a mere change of money. 80% of the time people will leave. only 20% of them will stick around to see any help can be provided. likewise my friend was asking me to leave as we are about to enter the station and train was approaching. i could have left too but i was not ready to leave , i wanted to stay there until gets money from someone. my friend asked me many times to move as she was a stranger and she was not our concern but i was thinking otherwise, i was thinking that she is also someone’s daughter , she will too become someone’s wife and mother , i can’t let her stay here at night and asking for money from strangers. its dangerous for her to go around with men. above all auto driver will  not let her go.

i could see her tense and she knew that she is in trouble and she is a lonely woman alone outside the station late at night with not many people around. i decided to stay till she get the money and she failed to get any money from anyone. she i decided to help. i reached to her and asked if i can pay money to auto driver , she of course rejected my decision but i insisted and later she allowed me to pay , i was not seeking for her approval anyway in this situation but i thought may be out of courtesy  i should ask her. so i paid from my pocket and i paid more than the entire expense as i too had no change so i had to give whatever i had in  my pocket. she resisted not to do it but i was ready , after all it was only money.

auto driver of course was happy , her got fortune. he left. and that woman had sigh of relief. she looked at me and said thank you , i said , its alright. and then she rushed towards the station. this what i wanted , rush towards the station. i friend was of course looking at me with mischief and called me stupid of course but i am not here seek someone permission and someone’s judgement about what he or she think about me. i was happy with what i did and i think it was need of an hour to help someone in need and i was feeling good about it. that woman might be thinking that i am an idiot or she might be praising me for my steps which i took.

She left to her home safely , i was happy .

“A man should clinch his fist only to save woman not to destroy her.”